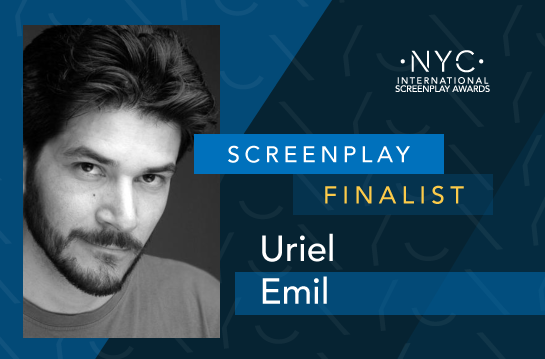 My name Is Uriel Emil Pollack. I was born in Haifa, Israel. I live in Brighton, United Kingdom. My main hobby is taking care of my vegetable garden.

The original idea is from my own life, when I wanted to bury my own dog Johnny ‘up the mountain’. I first wrote it as a short script in 2014 and have been rather slowly redrafting since then.

Not like writing a feature, for me writing a short is a more intuitive process – it’s more like writing a poem. I just regurgitate it intuitively onto the page. But then the redrafting process is similar to redrafting long form. when I deal with a short script though, I find that the best practice is to put the finished draft aside for at least a couple of months before I look at it again, in order to try and have some level of objectivity without being too attached to the bits that need shaving off.

I’ve been writing, mainly poetry, since I was a teenager. After becoming a professional actor I tried writing for the stage, but writing drama using only dialogue just seemed unnatural. I then started reading scripts and immediately felt well in my comfort zone and so decided to focus on scriptwriting in my spare time.

I love the work of the Coen Brothers. I also adore the work of the Polish filmmaker Paweł Pawlikowski. I still feel though that my main influence is the poetry of Raymond Carver. All of them are a great lesson in the art of ‘less is more’.

I’ve been obsessed with MANY films!! The Big Lebowski, Reservoir Dogs, There’s Something About Mary, Dial M for Murder, Ida, Come and See, and many many more, from different genres, styles and cultures. Each of them I’ve seen many a time and would happily watch them again! Hard to explain why..

My favourite moment in cinema history is Rutger Hauer’s monologue at the end of Blade Runner “All those moments will be lost in time, like tears in the rain”..why? I guess this android’s monologue is the most humane thing I’ve ever heard.

Being an army veteran (served in the Israeli army for 3.5years) I feel a strong affinity to the characters of Private Witt (played by Jim Caviezel) and 1st Sgt. Welsh (played by Sean Penn) in The Thin Red Line.. When I bid someone farewell I tend to use Sgt. Welsh’s line “If I never meet you in this life, let me feel the lack”.

If I could I would have liked to have a chat with Tolstoy and ask him what he thinks of humanity in the light of all the horrors humans inflicted on the planet throughout the 20th century and up to today.