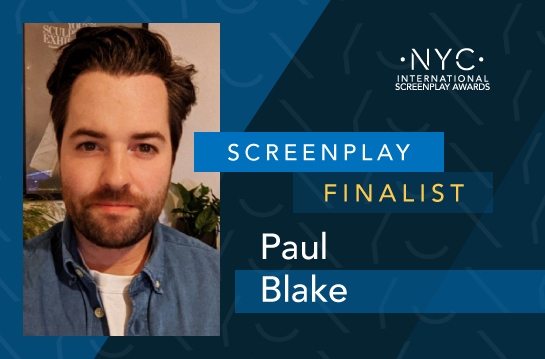 My name is Paul Blake, I was born in Middlesbrough in the North East of England and now live in London. I have too many hobbies which keeps me in a constant state of anxiety on what to do in my spare time, but comedy writing is the big one.

Where did you come up with the concept that just placed as Finalist in the screenplay contest?

“Music Tech” is based the Music Technology BSc Honours university course I took at Teesside University and although it was a great course and led me to a job in TV, the students were essentially comedy characters without knowing it. Some of the scenes in the pilot for Music Tech happened in real life and the outline for the series is also full of real life events. It was too ridiculous not to make into a sitcom.

How long did it take you to develop it into the screenplay it is now?

I wrote it on and off for about a year, I juggle writing alongside full time work as an edit assistant/postproduction supervisor in the TV industry in London. Sometimes I need to put writing/projects on hold when there’s a busy period sadly. But each time I went back to write more I’d learnt more and researched the do’s and don’ts of screenwriting as well as rewatching some favorite sitcoms and taking notes on what works and why. Something I’d recommend to anyone trying to get a good episode structure at least.

I started by noting down all of the events I could remember from my University experience, then took some ideas from my notes that I make per day/week/month whenever I think of a scene or character or just a line of dialogue.

Then rather than blocking out the entire episode (which I now do making the process a million times easier) I just started writing it and got as far as I could.

It was a mess of ideas at first, but it was enough to expand from. I wrote well over 30 drafts before I got it to the stage where I could fine tune each part, I find the best thing to do is finish the draft, wait 2 weeks then reread it with fresh eyes. And keep doing that until you read it and find that you’re not changing anything, then it’s probably good.

When I was about 27 I was going through a bit of a tough time with work commitments and general life issues, I met up with a friend who had an idea for a short film and wanted to collaborate on it. I had no idea about writing I was just a fan of comedy and thought it would be funny to put something together to make him laugh as well as get my mind off everything. I wrote 3 pages on Microsoft Word with absolutely zero structure it didn’t make sense, but I was immediately hooked. I then went on to write a short film which I filmed a year later. Then started work on multiple other TV pilots, Film scripts and Short films.

There’s quite a lot, for screenwriting Tarantino is a great example, at least with dialogue and I’m a big fan of the story structure the Coen brothers tend to put together.

But I’d say Martin McDonagh’s films are similar to the style I like to try and make, that fine line between comedy and tragedy.

The Office (UK). I can quote basically every line and do regularly to an annoying degree. It’s just a perfect sitcom, story, characters and dialogue. I refer to it every so often when I’m struggling with a scene and then inevitably end up watching 3 episodes and forget what I was doing.

The coin toss scene in “No Country for Old Men” at the gas station is one I always remember. It’s intimate, quiet and in middle of nowhere which all adds to this strong uneasy tension and suspense throughout. We as the audience know this man is a psychopath but the kind old man doesn’t, so you’re expecting something horrible to happen at any point which really pulls you into the dialogue which is incredible. Great scene.

There’s too many, but in terms of comedy I always remember “Peter Venkman” in Ghostbusters being hilarious, from when I was a kid to now as an adult. And for a comedy character to still be funny after 38 years is pretty impressive! Although I’m sure Bill Murray is a big reason that character was so good.

I’d like to think it would be someone profound who had a great vision and ideas to further humanity like Einstein in the early 1900s, but if it was me asking the questions, I’d be asking pointless things like “What are you doing?” “What’s that shiny thing?” etc.

So I have no idea, but I know my question would be stupid.