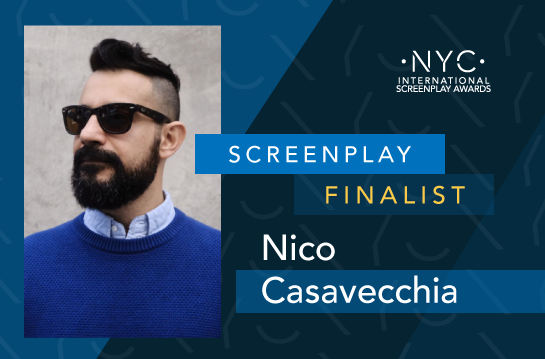 My name is Nico Casavecchia, I was born in Buenos Aires, Argentina and my hobby is illustration.

We develop the concept back in 2017 working in the Virtual Reality version of the project that we later adapted to a feature screenplay. It took us about a couple years to develop the script.

We started brainstorming ideas on how to adapt the VR project, then we outline together and split the scenes. We later re-wrote many times based on the feedback we collected.

When I got interested in doing features I was already working as a commercial director. I thought a good way to start would be to read screenplay writing books and learn the craft. From that experience came my first movie, Finding Sofía. After that my love for writing only grew bigger. As a director, screenwriting gives you the tools to create your own projects and express your ideas.

I have so many influences that are impossible to distill at this point. For BattleScar a big influence was Kerouac’s “On the road” and Patti Smith’s “Just kids”. Both books were foundational for the tone of the screenplay.

I grew up watching Italian Cinema from the 70s at the same time I was experiencing all the late 80s and 90s pop culture movie. So my brain is a mix of Antonioni’s “Blow Up” and Zemeckis “Back to the Future.”

Europe 1970s. Antonioni, Visconti, Fellini, Bergman, Tarkovsky. I think in Argentina people are obsessed with that period of filmmaking and it was a huge influence for me too. I think the way those movies are constructed is nothing like what we are doing today. Re watching the period can be a refreshing experience.

Who’s your favourite character in cinema history? Why?

The Dude in “The Big Lebowsky” without a doubt. The first scene of the movie is enough to deeply understand who he is and what he wants.

I would ask Akira Kurosawa how did he manage to balance the spectacle while revealing the soul of the characters to create movies that are both so beautiful and still so intimate!