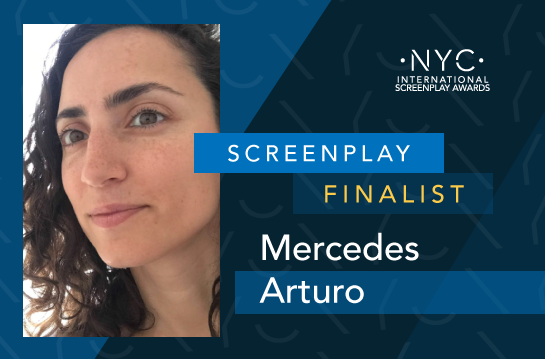 Mercedes Arturo, I was born in Sierra Grande, a tiny town in Patagonia Argentina. My hobby is sculpture.

BattleScar as a feature screenplay is inspired by the VR short film. From it, we kept the main two characters and the world of NYC in the late 70s. The original concept was created by Nico in 2016/17 and he got inspired by me reading Just Kids by Patti Smith and being so immersed in it that I told him I wanted to live in that specific NYC, and not in our contemporary NYC. (And then we moved to LA haha)

First we did the VR, from there we started, but it took us many versions to create a full new original story, even if we still have Lupe and Debbie as main characters. It was beautiful and painful at the same time, we had to let go of many scenes, and create whole new backstories. It was hard to be three with different time zones and skills, but in the end it all came together like a perfect puzzle.

It’s a circular story. When I was a kid I wanted to write literature, especially short tales. Then I changed my mind and worked in theater and visual arts. Later I attended ENERC film school where I took the Director’s programme, and there I re-discovered the joy of writing, this time, screenplays.

I would name Anna Melikyan and Agnes Vardá, both are so playful and free! But there’s also a more melancholic influence that I recognize in me and I could blame Marguerite Duras and Forrough Farrokhzad for that. I also love all of Jane Campion’s movies, but An Angel at my table has been a huge influence. And talking about Australians, I can’t live without Baz Lhurman’s movies. Moulin Rouge is magic!

I’ve been obsessed with Rusalka (Mermaid in English), Anna Melikyan’s second movie. I love how she is able to use pop culture influences from different eras, create the most exquisite fantasy scenes and laugh hard at our reality, all in the same wonderful movie. And right now I am obsessed with The Marvelous Mrs Maisel. The writing and the camera work are so beautiful and Rachel Brosnaham reminds me of Barbra Streissand in those amazing 70s comedies like What’s up Doc? by Peter Bogdanovich. That kind of effervescent comedy with such precise timing, it is so hard to do! And she nails it.

Maybe the 30s because of Chaplin, maybe the 70s because of Bob Fosse’s musicals and the Italian Cinema, maybe the 90s because I grew up with those movies. I can’t choose, this is a very hard question!

Aside from Rusalka, just not to repeat myself, I would choose Olmo, from Novecento by Bernardo Bertolucci. Because what he represents: the people, the workers and a whole piece of Italian history.  Also because of his hat with frogs, such an iconic image!

Walt Disney. I’d love to learn everything from him. From his sense of color to his sense of business. His talent, his vision and his intuition are impressive.