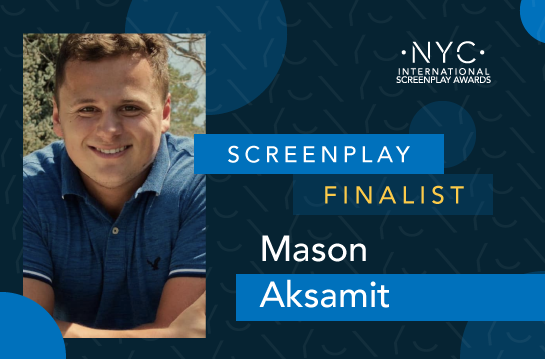 Mason Aksamit, I was born in Hartford, CT. I grew up in Castle Rock CO, and currently live in Bristol, RI. I would say that both acting and writing are my hobbies until I can make good money from them.

The concept derived from an experience in my own life where I came to grips with a persona I was connecting to in myself that I wanted to kill off. So I took that person that I didn’t love and killed him in this screenplay. From first idea to first draft of this script it took about 45 days. That draft was then workshopped for about 12 months, with numerous storytellers giving notes. The script is now on Draft #10, and is close to shooting script.

My first part of the process is character development. Once I had a strong sense of characters, I found the character arc of my protagonist and then built the story around him. I then create scenes with conflicting viewpoints that start with general scene overview and then funnel down to a single point that carries the story to the next scene. Then once all of these structures are lined up. I burn out a first draft without overthinking. I just got the gist of everything on paper. I then mold my writing bit by bit, cleaning up scenes and molding a story out of it.

I have loved storytelling since I was in 3rd grade. I always had a passion for both history and psychology, and I was able to turn those interests into my writing. While in film school, I became intrigued by many different historical film ideas and just started writing. I’ve been doing it since.

My biggest influences for this screenplay are Wes Anderson, Monty Python, Edgar Wright, and William Shakespeare. Each screenplay I write derives influences from different storytellers.

The Truman Show is my most recent obsession, but when writing this screenplay I was a big fan of Game of Thrones (prior to the ending). I loved the character development in the show and was so intrigued by the acting, but the writing did really drop in the last couple of seasons.

Voldemort’s Return in Harry Potter and the Goblet of Fire, nothing says epitome of evil like Lord Voldemort. I love this as the midpoint of the series and how much the storyline changes from this moment. The character of Voldemort is so dark and snake like, it’s truly terrifying for what one would call a children’s story. Ralph Fiennes portrayal is also incredibly brilliant, as he is in all of his villainous roles.

Quasimodo in the Hunchback of Notre Dame. Quasi is amazing because he isn’t the normal prince charming. He doesn’t get the girl in the end but he’s still the hero. He has a beautiful sole and makes his efforts to help others unconditionally, which is also his biggest flaw.