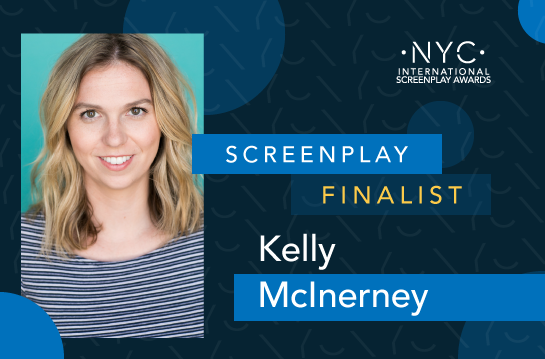 Kelly McInerney born in NJ, currently live in Los Angeles. My hobby is comedy! Writing, performing stand up or sketch, or watching it, I love it all.

I actually worked at a covid test site during the pandemic and met a great group of people. The characters are loosely based on them. It took me about a year or so of rewrites to get it where it is now.

I had the idea, then thought of the characters, then thought of the three storylines. Then broke it into a 3 act small outline just outlining the main beats of each act – mostly the A storyline. After that I wrote the very long outline, writing out each beat. Then I wrote the first draft. After the first draft I submitted it to my biweekly writing group I’m in and they gave me notes. I also gave it to other friends. Adjusted it with those notes and had them read it again. Then got more notes and adjusted then had them read it again. Keep doing that until you’re like well…this is the best I can do.

I’ve always wanted to write – when I was little I would write short stories about fake superheroes like Lion Lady and Boogerman. As I grew older, I did NaNoWriMo and wrote more stories. But my true love is TV and Movies so in college when I saw I could takes screenwriting class I did and kinda fell in love. I prefer script-writing to novelwriting (though I do love reading books) just because I’m mostly a dialogue girl and you don’t have to be so flowy with the description in scripts. PLUS, you can turn those scripts into movies and shows! Pretty cool!

This is so hard!

Yes, I’m obsessed with SNL, I follow it every year even if the episodes stink. It was always my dream to be on it. But also Scrubs and The Sopranos because I think they’re incredible shows and have great pilots. They know how to not just create one character but an ensemble you fall in love with too. Both shows bring so many feelings, they make you laugh and cry. I like shows that make you feel everything.

I’m also obsessed with the movie Scream just with how it was written – how Kevin Williamson wrote it in a weekend and it’s hilarious and has a little bit of everything, too. But ultimately, has a great and fulfilling ending.

This is so hard! I don’t know if I can choose one! I will say a recent one which is just the movie Barbarian. Watch it in a packed theatre and see how everyone reacts to the twists and turns.

Ace Ventura because nothing will beat that Rhino scene to me in Ace Ventura 2 – it’s gross, uncomfortable, but hilarious. He’s an insane character but he always means well. Sure sometimes he’s selfish and crazy but his purpose is always to find that missing pet and save the day. Very silly, very dumb, but very unforgetable.

Probably Joan Rivers, she dealt with so much, especially as a female comic and I’d want to just pick apart her brain and how she writes jokes and memoirs and just lived her life.