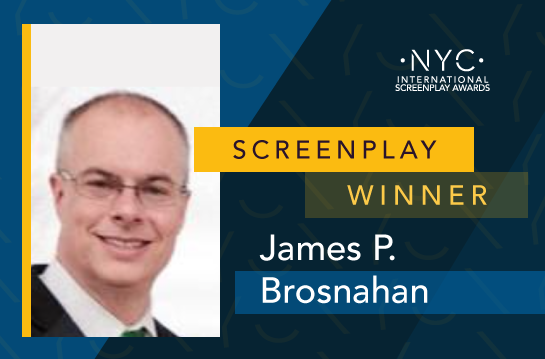 James P Brosnahan. I go by Jim, unless visiting family in Ireland where I answer to Seamus. I was born in Chicago, grew up in Pittsburgh, attended the University of Dayton and reside in Columbus Ohio. Besides being a proud grandparent, my hobbies include collecting vinyl records, watching classic films (Columbus has an amazing Summer Classic Movie Series!), amateur radio (wj8ack), woodworking and tap dancing. A passion of mine is my work as a Board Member of Form5 Prosthetics, where we empower people in the limb difference community to interact with their world and their future.

I love stories based on inspirational people who are underrepresented. As soon as I completed my biopic First Drop of Rain, based on the life of the pioneering novelist Frances Burney, I set my sights on writing a second female centered drama inspired by “Incidents in the Life of a Slave Girl” by Harriet Jacobs. This project resulted in the screenplay No Man’s Property that was awarded best feature in this festival. What drew me to the subject is that Harriet’s life provided a strong foundation upon which I could build a story about a strong female that was not setting out to change history, but rather to improve her situation and earn the power of choice.

No Man’s Property is the result of two years of research, writing and rewriting. The research went beyond the history for this period piece. It was important to me that this story had something new to say, so I researched other works with similar topics and settings. What I found was, while there are other films about this era that follow the journey of an enslaved person’s battle for freedom, too many “render Black people as merely Black bodies onto which the sins of this ragged country are violently mapped” (A.J. Bastien, 2020). By contrast, Linda, the 19-year-old African American protagonist in No Man’s Property, is far more dynamic and greater than the suffering forced on her. Instead of reaffirming the violence that everyone correlates this topic with, this story highlights the inner strength and life of Linda within the world of the Antebellum South.

The process I follow depends upon the type of story. When writing a plot driven screenplay, I like to begin with an outline of the storyline, scene by scene. For a character driven screenplay, such as No Man’s Property, I start with the main characters and outline their individual story arcs.  I then merge the character story arcs to form the storyline. In either case, the result of this first step is a working framework. Once I have this framework, I write to each scene, in sequence from beginning to end, to develop the first draft. I then add supporting scenes in revisions. Basically, my first draft serves as the foundation for a richer story that emerges during revisions.

In No Man’s Property, I set my focus on telling a story that is informed by Linda’s views, challenges and ultimate accomplishment. I selected some actual events from the historical character’s (Harriet Jacob’s) experience. The story is then rounded out with fictional situations and composite characters to enhance drama and tell a story in a thought provoking and entertaining way.

I find it is important to understand each character’s problem to solve, background, worldview and what they desire not only for themselves, but also for others. I focus on a single character at a time, and then pull together the ensemble once I understand all the voices. In later drafts, I track a character’s journey in order to clean up consistency issues and make sure that their arc is effective.

Characters based on real people are the most challenging, because their motivations may not easily translate for a modern audience. I read as many primary sources as possible, and use secondary sources to fill in the gaps. I then bring the historical person forward to present day. This helps me to effectively frame their motivations within today’s worldview. I believe it helps to make a character that is understandable to the actor and relatable to the audience; two critical components of a memorable character. It takes many revisions to get it right. I believe it is worth the effort as it results in honest and relatable characters.

I caught the theater bug in middle school and remained active in all aspects of theater from performance to technical until my son with Down Syndrome was born. I realized that spending hours away at the theater was neither practical nor desirable. I found a new way to participate in the arts as a playwright. It was something I could do at home when time permitted and I found that I absolutely loved writing. A few of my stage plays made it to publication and onto stages in the UK, Europe and US. One day I thought to myself; it would be fun to learn how to write a screenplay. I have always loved classic films and the challenge of learning a new craft was attractive. To date, I have written several screenplays and my learning continues. So, in a way, No Man’s Property has been many years in the making.

Classic cinema, especially Frank Capra and John Ford films. The list is really endless, as I always discover something to emulate in nearly every film. When it comes to early films, I appreciate the equal attention given to dialog and cinematography. One can see the evolution from stage to screen. I do my best to tell a story visually while also crafting dialog that advances plot.

I am constantly obsessed with a movie or TV show; what changes is the movie or TV show. I love to watch something multiple times as I always discover new insights. I remember seeing “Star Wars Episode IV” nearly weekly for as long as it ran in our local theater during its original theatrical release. No better way for a space age boy to spend his grass cutting money. I believe that I have seen every episode of “Gilmore Girls” more than once, and some a dozen times. The dialog is amazing as are the well-defined characters that walk a tightrope between grounded and quirky. The film “Greatest Showman” is near and dear to my heart as a parent with a child with special needs. I have watched the new sensation “CODA” over and over again.  When any Frank Capra comes on TV or to our local classic movie series, it is time to drop everything but the popcorn.

The hitchhiking scene in “It Happened One Night.” We learn all we need to know about the characters and their relationship in one scene with minimal dialog and one simple location. The moral of the scene; “the limb is mightier than the thumb.” Said another way; she wins.

Atticus Finch in “To Kill a Mockingbird.” The synergy of a poetic screenplay and a never to be topped performance.

Honestly, Harriet Jacobs would make the list after reading her inspiring story. She wrote about her view of self-emancipation. Although free from her enslaver, her dream was not yet realized. She wished to walk in the same sunshine as white people and not in the shadow of Jim Crow. Being a Civil War history buff, I would ask her about her view of Lincoln and people like Joshua Lawrence Chamberlain. I would be interested in hew views of reconstruction and the post-Civil War South. Ultimately, I would value her vision of what she dreamed for the future.  From what I experienced by her writing; I am sure her insights would be relevant today.