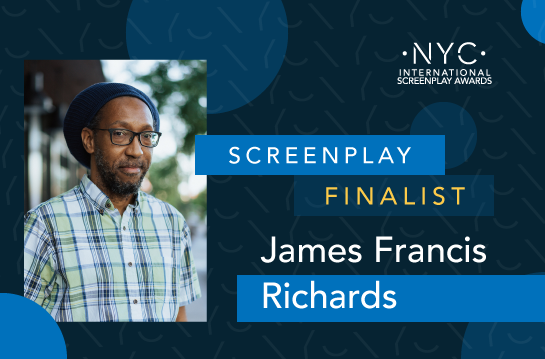 My name is James Francis Richards, I was raised in Queens, New York and currently live on Staten Island, New York. I love everything related to art, visual art in particular and love to create images of all types.

I love Sci-Fi and wanted to find a way to put my own spin on it. I wanted to combine elements of Afro-Futurism and music and ritual and bring that into the Sci-Fi genre. The concept began brewing around 1999 when people started talking about Y2K and all of our computer systems crashing down. I worked on it on and off, and then put it down for almost 20 years. I came back to it in 2019 when I had all the pieces I needed to complete the vision.

I wish I could say there was some organized plan. With my other screenplays, there is a system beginning with understanding the themes and values I wish to explore, creating bios for all the main characters, outlining the major movements of the story and then trying to craft that into a draft of a script. This project bounced around for many years, looking for the bits and pieces of inspiration to get through the numerous dead ends. Eventually, all the ideas began gelling in the last couple of years.

I have always loved writing, but in many ways it was always intended to be a means to an end. The end being the creation of some kind of film or video project. In order to get there, the must be plan and that is where the writing comes in.

I saw “Stranger Than Paradise” by Jim Jarmusch and “She’s Gotta Have It” by Spike Lee and was amazed that anyone could make movies like those films. I found out they both went to New York University’s Grad Film Program and I was determined to go there. By some miracle I got in. There, my professor screened “The Seven Beauties” by Lina Wertmüller and my brain could not believe what it was experiencing. I realized anything was possible in cinema, that there are really no limits other than imagination. That was such an inspirational moment I carry it with me to this day.

I have to admit an admiration for “The Purge” series of films. The premise is strong, the world building is very believable, maybe too believable, and the casting is always solid. It’s genre filmmaking that is also embedding a lot of social critique within its structure.

My favorite moment is at the end of Sidney Lumet’s “The Wiz” when Diana Ross sings the “Home Song”. She is giving it all she has while singing that song. Gets me every time…

I can’t say there is one, but a character I keep coming back to is Elliot Gould’s version of Phillip Marlowe in Robert Altman’s “The Long Goodbye”. He is irreverent, confused and for the majority of the film out of his depth, but he doesn’t give up and his sense of justice and it drives him past his shortcomings. I find myself thinking we can all use some of that right now.

I would love to talk to Jimi Hendrix and ask him how he was so free.