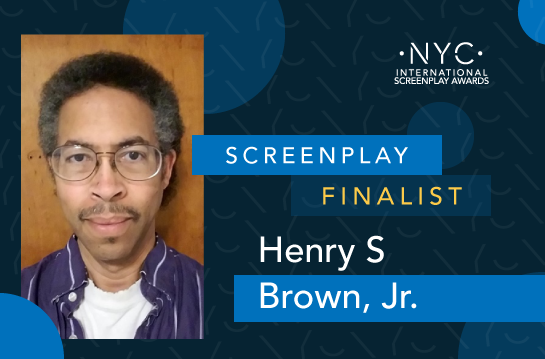 Henry S Brown, Jr.  I was born in Seattle and currently live in a Seattle suburb.  I enjoy watching television and movies, music, traveling, genealogy, but I particularly like songwriting and scriptwriting.

It started as a writing exercise for one of my classes (I’m completing my bachelor’s degree through an online program at Los Angeles Film School).  I came up with the title right then; even without a story or a plot, it sounds like there’s potential there.

I knew the Goldie in question had to be Goldie Hawn, then I immediately knew that the Overlords were trying to capture Goldie for some nefarious reason…a time traveling reason.  Literally everything else fell into place quickly.  First draft only took about 3 weeks.  This is the first time I’ve experienced having a story that largely wrote itself!

What I usually do is have a general idea of the heart of the action, basically have that “thing” that is the idea which leads to the logline.  Then I spend a lot of time figuring out the main characters, the supporting characters, and a visceral sense of their relationships (or lack of) to each other.  Having that, I can expand the logline out to an bullet-point outline/beat-by-beat synopsis of the plot.

From there, I start writing out the scenes that go with each bullet point.  If I have a strong sense of any given scene, I write that scene out first, no matter where in the story it happens, and put the various scenes into the body of the script like puzzle pieces that go in that one specific place.

Goldie and the Overlords of Time! was a little different for me, in that who the Overlords are and who all the lead and supporting characters are (all of them real people, and specifically chosen people that are all connected to Goldie Hawn in some way) and what they want developed so fast that I literally found myself forming the plot around all of these people and the structure of the plot appeared based on who the characters are.

In some ways, I’ve known since 4th grade, when I wrote my first script: a stage play about the Peanuts characters.  I only did one year of drama in high school, wrote and performed in a friend’s Star Wars videotaped parody and the idea came back to me but soon fled in favor of all the academic pressure to do something that for me was almost completely un-creative.

All those decades of living day to day went by until ten years ago. I was deep in a personal and creative negative zone, so deep that I forced myself to do something creative.  An idea about what would happen to a modern-day Arab-American Jesus came to me after thinking about all the anti-Arab vitriol floating around after 9/11.  I thought someone needs to tell that story.  Then I realized that this “someone” could be me.  All of my previous flirtations with screenwriting came back in a flood, and it felt nauseating, frustrating, aggravating, motivating and deeply meaningful.  In other words, it felt “right”.

For drama and thrillers, I look to Rod Serling.  His teleplays get right to the heart of his protagonists.  They have some real or meta-real experience and are changed into something they weren’t expecting or changed back into the thing they didn’t know they were.  Even in some Twilight Zone episodes where the plot seems obvious, the journey itself manages to surprise and instruct the protagonist as much as the audience.

For comedies, I go to several places for comedy writing:  Carl Reiner (Dick Van Dyke Show), Carol Burnett (Carol Burnett Show) are two quick examples.  One head stands high above them, which is impressive, since he’s not that tall: Mel Brooks.  His movies blend several different kinds of humor wonderfully as far as I’m concerned, but the king of film comedy is his Blazing Saddles.  That film is a masterclass in comedy writing.  Parody, satire, history lessons, slapstick, sheer goofiness, vaudvillian entendres, silly musical numbers that define a character or situation, and about three or four levels of 4th wall breaking.  It’s all there with characters that are not soon forgotten.  If I can write anywhere close to Rod and Mel’s material, I should be doing quite well.

I have to say The Brady Bunch.  Being a kid during its first run on TV, I responded to the humor and kinetic activity of the kids in opposition to Mr. & Mrs. Brady’s attempts to keep things orderly and calm.  The trick with that show is this:  it’s actually a 30-minute drama with silly moments and a laugh track squeezed in that forces it to be a sitcom.  The in-universe relationships between all 9 of the main characters feel quite real.  A real family has a teenage son who thinks highly of himself and learns he’s not all that.  Real kids bounce balls in the house and smash their mom’s vase or hit their sister in the face with the ball.  Real siblings try to scare the other siblings around Halloween.  The Bradys could be an actual, functional family.  So, why beat around the bush about it?

Around 8 years ago, I suddenly thought “what would happen if Mr. Brady and all 3 boys were Black?”  How would those interfamily relationships work?  How would the episodes be different?  I’ve been working on this ever since.  First, I wrote it as a one-act play around Michael Brady and his new backstory I created.  Second, I did the same for Carol Brady, another one-act play.  Third, another short play explaining how they met.  A feature length film script came into being after that.  Currently, the idea has improved and come full circle by being a 60-minute drama series proposal.

I have many, so I’ll talk about my first.  The transition from Kansas to Oz in The Wizard of Oz.  Up until then, everything is in sepia tone, this not quite black & white but more of a black & brown tone.  After the hurricane, in one smooth motion, a sepia-toned Dorothy opens the sepia-toned house’s sepia-toned front door.  Beyond the door is bright color all about.  As Dorothy comes out of the house, she too is now in full color.

Again, I have many candidates, but I’m going to mention Sherriff Bart from Blazing Saddles.  Being a Black man in the mid/late 1800s, he goes through all of the social situations Black American society have to deal with.  At first, he’s on a chain gang, treated like a slave just a few years earlier he would’ve been.  Because of the machinations of a corrupt governor, he is ironically made Town Sherriff of Rock Ridge.  The townspeople cannot handle a Black man in such a high-level job.  He makes a friend of a destitute White prisoner and slowly gains the underground acceptance of the townsfolk.  Because of his success in the town, the governor sends agents in to kill him or destroy his favorable reputation.  He rallies the townsfolk and ultimately succeed in eliminating the villains.  He finally gets the overt acceptance of the townsfolk, and he decides to move on.  Bart does all of this as a tongue-in-cheek protagonist, playing with, and surviving, the situations as they swirl around him.  This character goes through a lot, gets a lot of laughs, gets to be an action hero, gets the bad guy and gets his own well-deserved limo at the end.  Bart does it all and comes out of it with a smile…and one too many schnitzelgrubens.

There are just too many people this applies to, some because of their artistry or scientific breakthroughs, some because of the impact of their personality upon the general public and history at large.  In American history, one person I’d like to converse with the most is probably Benjamin Franklin.

That guy was a powerhouse even though he didn’t look like much of anything.  Ben could write stories, wax philosophically on various subjects, conduct some of the earliest (for this country) scientific experiments with electricity, all while being stylish and having his own little entourage in France while being an ambassador there.  Ben was involved in a lot of stuff, yet never lost his sense of creativity, wonder or humor.  Considering he was still very active right up into old age, he is an inspiration to us older folks who are just discovering and utilizing our inherent abilities.  I’d love to have many conversations with Ben, have lots of tea and talk about art, science, music, philosophy, politics, drama and learn from one of the true creative masters.