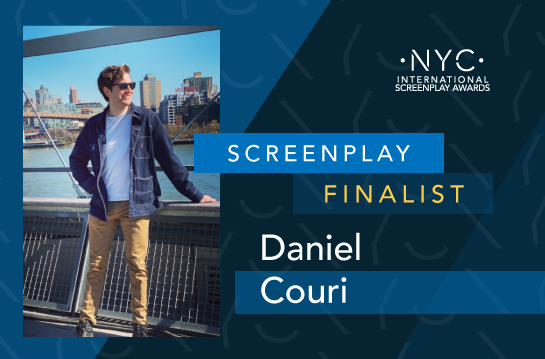 A: Dan Couri – I was born in New Jersey and currently reside in New York City. My hobby is most definitely screenwriting, haha.

A: I come up with concepts for screenplays in the most random places. For this one, I was going out to a bar with two of my friends (who are a couple) and we were supposed to meet up with another couple and their friends. However, once we got there, it was only the other couple…no other friends. So, at one point I was sipping a beer and thinking, “Wow I’m straight up fifth wheeling right now.” And of course, I thought this might be a funny concept for a TV show.

It took about 10 months of daily writing and multiple drafts to become the finished product.

A: I usually keep a list of ideas in my notes app, since like I said I think of concepts randomly throughout the day. So, once I have a concept and I’m ready to tackle that, I do a brainstorming process where I use the whiteboard in my apartment and try to list out a few bullet points of the overall plot. Then, I will take that and develop it into an actual outline of the script. Sometimes, if I’m too eager to start the actual script, I’ll be a little vague in the outline and figure it out as I go (I find that having an outline is easier though). Then, I start the actual writing of the script and try to push myself to write every day, even if it’s just 10 minutes.

A: I think in High School, when I realized my best subject was English and consistently scored high on almost all of my writing assignments. I also was always super into movies and TV and always dreamed of being in that world. Around that time, I started coming up with concepts for movies and shows and wrote them down.

A: I’d say The Coen Brothers, Christopher Nolan, Richard Linklater, Edgar Wright, Taika Waititi, and of course – Aaron Sorkin. All them have inspired me in different ways but I’ve paid close attention to the dialogue and the way they frame their stories which has helped me learn a lot.

Too many to name. I’d say recently I’ve been obsessed with The Other Two created by Chris Kelly and Sarah Schneider. This has served as a massive inspiration for my TV Pilot because of its main character being part of the LGBTQ+ community, its sharp humor and the amazing performances by Drew Tarver, Helene Yorke and the rest of the cast.

Hmm I don’t know if I have a favorite…but I did recently rewatch Moonlight and the beach scene where Juan is teaching Chiron how to swim is beautiful. Juan was his father figure and taught him important life lessons in Chiron’s childhood.