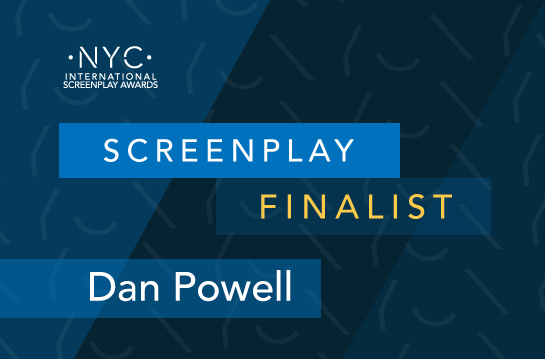 My name is Dan Powellm I was born in Bradford (U.K) in 1986, currently living in Castleford (U.K) and I’m a writer and stand-up comedian.

I’ve been having a few existential crises recently, partly spurred by the pandemic, but mainly just my own neuroses! I’ve been thinking a lot about getting older, and how I didn’t want to coast into middle age having not gone after what I want. The screenplay was pretty much borne of that thought really, the thought of just existing rather than living, which is the state the main character is in when we find him in the story. He is at a point where he is on his own, and even the simplest of tasks (like getting dressed in this instance) seem impossible. It’s really about grief (which is something I think about a lot) but positioned in a way that (hopefully) you don’t realise until the final scene that this man has been acting this way because he’s broken.

The process from start to finish was 12 weeks, with probably a couple of hours work most days, longer at weekends.

I’m currently doing a master’s degree in comedy writing at Falmouth University, and I developed the script as part of one of the modules for that. What was great about doing it this way was that it gave me a structured approach. Usually when writing off my own steam, I will just start to write, with no real planning or design beforehand. I’ll have an idea and run with it. But this time, because it was led by the pace of my studies, the process was so much more technical and thought out, for example spending weeks developing the premise, the characters and the narrative before ever getting to “FADE IN” or whatever the non-cliché version of that is! Doing the hard yards in early development made the actual writing of it a joy, and it came pretty easy once the foundations were laid.

I always loved storytelling. I originally wanted to be a journalist when I was at school, but life had other ideas and I became and office drone for nearly 20 years! I continued to write for fun during this time, writing articles and interviewing bands for a local music website, and writing Film and TV content for Den of Geek. I was obsessed with film and TV. I wrote a few scripts that never went anywhere, mainly corny action movies based on the stuff I liked growing up, and even though I wanted to write screenplays at this stage, I didn’t really know how. It wasn’t until I was made redundant from my job during the pandemic that I decided to pursue screenwriting seriously. I enrolled on a course at the National Film and Television School taught by Paul Fraser (one of the writers of the Paddy Considine film Dead Man’s Shoes) and really got to grips with the fundamentals.

After enjoying this immensely, I was looking for the next thing and stumbled upon the degree I’m doing now (who knew you could get a degree in comedy writing!) and produced the script that got me in the finals of this competition.

The film that made me want to be a screenwriter growing up (or really pay attention to the dialogue and understand “tone” in film) was Grosse Pointe Blank. I just thought John Cusack was the coolest person on the planet, even whilst having an existential breakdown.  That film opened my eyes to what great dialogue could do, and I still quote a lot of it even to this day.

In terms of my writing now, I’m always picking up different things. I love the show “Community”, the meta aspect of it is brilliant, and more recently things like “Fleabag” and “This Way Up” by Aisling Bea have been on my mind when writing. The way these shows are hilarious but still manage to hit you with pathos is something I’m always striving for. In terms of this particular script, one of my jumping off points was “The Royle Family” episode “The Queen of Sheeba”, which I re-watched with my son during lockdown. The absolute crushing sadness of Nana’s death scene being immediately punctured with a ridiculous visual joke is just sublime.

I am obsessed with anything written by Steve Pemberton and Reece Shearsmith (League of Gentlemen, Inside No 9 and Psychoville). They can do everything. The amount of story they are able to squeeze into 29 minutes on Inside No 9 is phenomenal, and taught me a lot about economic storytelling.

I grew up on the action cinema of the 80’s and 90’s, so the things that stick in my mind are things like Arnie ripping the guy’s arms off in “Total Recall” and then slinging out a pithy one liner. But if I had to pick just one moment in all of cinema (which is hard) it would have to be the opening scene of “Inglorious Basterds”. It has everything. Amazing writing, great performances and the most tension I have felt in the cinema ever.

I’d love to spend a day with Robert DeNiro in the 1970’s. I bet that guy was intense.