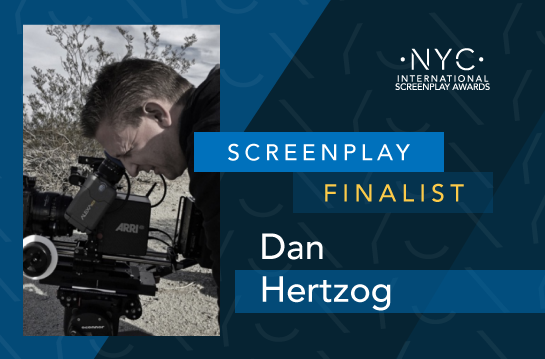 Dan Hertzog. I was born in Harrisburg, PA, and currently reside in Historic Swedesboro, NJ. I love to travel, explore, and discover new things.

I first came up with DOMINO SPRINGS for my Advanced Writing class at USC. Then, revisited it again as a potential thesis film at AFI. So, suffice it to say this notion of a Bermuda Triangle in the Mojave Desert has been kicking around my head for quite some time. Finally, the pandemic gave me the week off I needed to expand the story into the proof-of-concept short script it is today.

Research. Travel. More research. More travel. And every trip to a ghost town only inspired more characters, each with their own story of how they came to live in Domino Springs. For this short though, it was about honing in on one character’s drive and the consequences that come from it. So, it’s the world building that takes the most time.

Once I know my characters, my writing process is fairly straight forward.

I once lost a directing job on what was to be my first feature film after four years of development with the writer. I decided right then and there that if I was going to work gratis, it should be on the stories I wanted to tell. My wife and I have been talking about making a movie in Mongolia since we first met, so it was up to me to craft a story that we both felt passionate about. Our international drama, DREAMS OF STARLIGHT, is the resulting feature script.

Honestly, the off-beat, quirky characters of David Lynch and the authentic, period dialogue of David Milch are two things most screenwriters like myself can only aspire to achieve.

The very first season of TWIN PEAKS had a huge influence on my career. When it first aired on April 8, 1990, there was just nothing else like it on TV. Growing up a fan of detective and mystery shows, the question of “Who killed Laura Palmer?” kept me tuning in to follow FBI Special Agent Dale Cooper week after week. As television evolved, I gravitated to other favs like DEADWOOD and LOST, combining elements of each into DOMINO SPRINGS.

Seeing STAR WARS for the first time during its re-release in 1978. That’s how I knew from a very young age what I wanted to be when I grew up. I immediately started collecting action figures, trading cards, and anything else from that galaxy far, far away. Still, my fascination didn’t end there. I was particularly curious about what went on behind the scenes and became obsessed with uncovering those cinematic secrets.

From that point on, I began amassing books, reading magazines, and watching TV specials with distant dreams of a career in what was then known as special photographic effects.

The Princess Bride. S. Morgenstern’s classic tale of true love and high adventure, with the ‘good parts’ version expertly abridged by William Goldman, made THE PRINCESS BRIDE an instant classic at a time I was just beginning to learn about visual design. It seems that, in screening some 284 movies my freshman year alone, my aspirations of becoming a visual effects supervisor slowly gave way to one day becoming a director of photography.

Georges Méliès. Where do you find your inspiration?